The ALS Association Support Paved the Way for Antisense Therapy 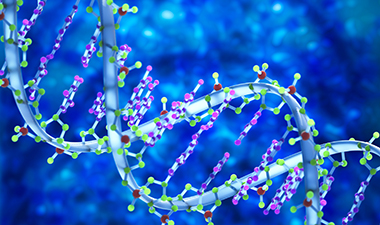 Antisense oligonucleotide (ASO) therapy is a groundbreaking concept that has drastically changed the gene therapy landscape. In the 12 years since the first study was initiated in ALS, ASO therapy has fuelled clinical trials in many different diseases, including two in ALS targeting SOD1 and C9orf72, the two most common genetic causes of ALS. The other diseases affecting the brain that are also in clinical trials using ASO therapy include, Spinal Muscular Atrophy (SMA), Huntington’s Disease and myotonic dystrophy, plus more targeting other diseases.

The ALS Association, through the generosity of donors, has taken the lead in supporting the development of ASO therapy from the very beginning in 2004. Originally, the concept developed by Dr. Don Cleveland and Dr. Richard Smith at the Center for Neurologic Study at the University of California San Diego was met with deep skepticism that the approach would ever be useful. Despite the negativity, The Association invested in ASO therapy from the very beginning during the preclinical trial work in the laboratory and is continuing to invest in this important therapy.

Antisense therapy prevents the production of proteins involved in disease, like SOD1 and C9orf72, with the aim to provide therapeutic benefits to people living with ALS.

ASOs are short single-stranded DNA molecules that can be visualized like beads on a string. Once taken up by a cell, such as a motor neuron (the cells that die in ALS), ASOs selectively targets and binds to the messenger RNA (mRNA) of SOD1, which is degraded before being made into protein; therefore, ASOs eliminate SOD1 by preventing it from being created. See Antisense Technology figure.

Antisense drugs are currently being developed and manufactured by Ionis Pharmaceuticals using their innovative antisense technology platform. ASOs are designed for efficiency, specificity and cost effectiveness. 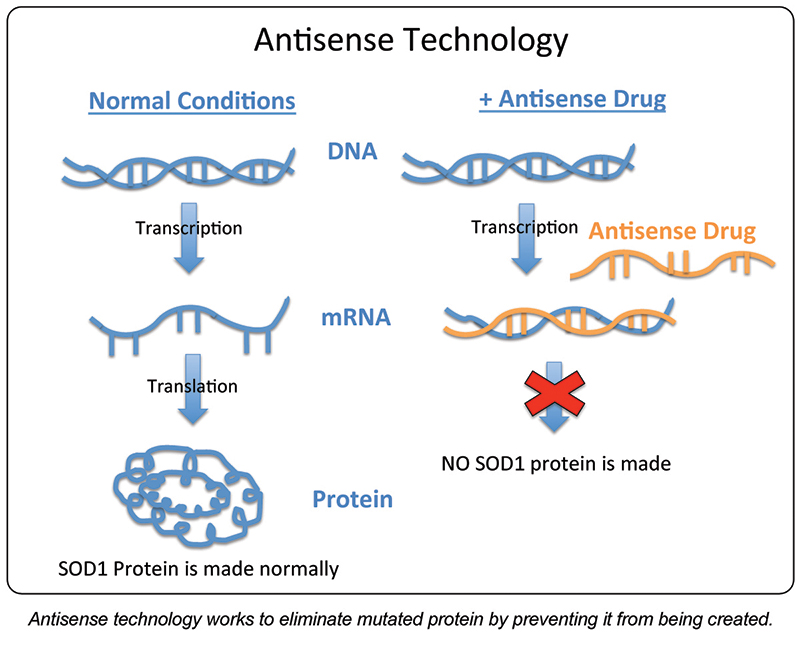 The Association supported the first-in-human clinical trial of antisense therapy targeting SOD1 led by Dr. Timothy Miller at University of Washington St. Louis, which was demonstrated as safe. As technology has evolved, Ionis Pharmaceuticals has identified approaches to reduce potential side effects. Armed with this new knowledge, Ionis enhanced the SOD1 ASOs and the newly optimized ASO drug is currently in a phase I/II trial that began recruiting participants in January 2016.

Antisense therapy may have an even bigger impact on C9orf72-mediated ALS, since it is responsible for approximately one in ten ALS patients. Discovered in 2011, The Association moved immediately to fund several research groups equipped to explore ASO therapy targeting C9orf72, including at Johns Hopkins University led by Dr. Jeffrey Rothstein, at University of California San Diego led by Dr. Don Cleveland and Dr. John Ravits, and at Massachusetts General Hospital and Harvard Medical School led by Dr. Clotilde Lagier-Tourenne, among others. Importantly, while developing the therapeutic approach, researchers are developing biomarkers, critical to inform the future clinical trial.

Research is currently underway to optimize C9orf72 ASO drugs to prepare for clinical trial. Importantly, researchers found that they can selectively target only the abnormal expansion of C9orf72, not the normal form, which is like the holy grail of gene silencing approaches.

In addition, protein is made by reading mRNA in two different directions and it is not known whether targeting just one direction is significant enough to have a major effect on disease. Recently, researchers discovered a way to target C9orf72 in the opposite direction, even further optimizing this therapeutic approach.

We expect the C9orf72 ASO clinical trial to start in the near future and are waiting details from the principle investigators. In only a few years, researchers went from the gene discovery phase all the way to clinical trials, which is a relatively short period by drug development standards.

From research and clinical trials supported by The Association, there has never been a more justifiably optimistic time for development of effective therapies for many people living with ALS, with ASO therapy at the forefront.