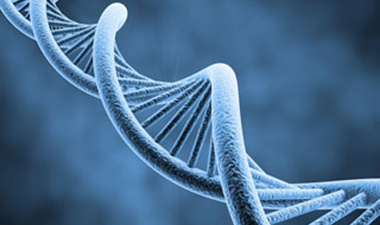 Approximately 90% cases of ALS are called “sporadic,” meaning the cause or causes of the disease are unknown. Approximately 5-10% of cases are due to genetic mutations and are inherited from a family member. If there are two or more family members with ALS, the disease is considered familial. There are an increasing number of gene mutations that have been identified both in familial and seemingly sporadic patients. Clinicians are recognizing that the classification of sporadic and familial is not are clear as it was originally thought. It is likely that genetics plays a significant role in sporadic ALS. Approximately 60% of the genes associated with familial ALS have been identified.

Genes are strings of DNA that provide instructions, or code, for making proteins. Proteins are the principle components of all types of cells, controlling reactions and providing structure. Genes are linked together to form chromosomes, which reside in the nucleus of each cell. Chromosomes and the genes they contain are inherited, passing from parent to child.

A mutation is an error in the DNA instructions, usually causing the cell to make either too little protein, or too much protein, or a defective protein. Different mutations may cause different effects. Any change in the normal protein can be harmful to the cell, and may cause disease. For instance, loss of function of the angiogenin protein due to mutation in the gene is thought to be linked to some cases of ALS. A gain of a new and toxic function of the superoxide dismutase 1 (SOD1) protein is probably how mutation of the SOD1 gene causes ALS.

A mutation may also be harmful not because it changes the protein encoded by the gene, but due to its effect on RNA. One type of RNA, called messenger RNA (mRNA), is an intermediary, or messenger, between gene and protein. To make a protein, the cell first uses the DNA gene to form an mRNA copy. That mRNA copy is then used to provide the “working instructions” to make the protein. After it is formed and before it is used to make protein, RNA is processed in several different ways. Mistakes in RNA processing may cause disease. For instance, the C9ORF72 gene may cause ALS due to accumulations of RNA that occur when the gene is mutated. FUS and TDP43 mutations may impair the normal processing of RNA from a wide variety of genes, leading to ALS.

What The ALS Association is Doing

ALS is remarkably similar whether it is inherited or appears in a person spontaneously with no family history of the disease. Therefore, insights gained from studying genetic forms of the disease are likely to benefit those with sporadic ALS as well. Therapies aimed at correcting the consequences of gene mutations may lead to treatment for all cases of ALS. The ALS Association has made significant investment into identifying new genes for ALS and has supported all the major gene discoveries. The two landmark discoveries are the SOD1 gene mutations in 1993 (the first mutations identified for ALS) and C9orf72 in 2011, the most common gene associated with ALS. The Association is investing in large, global ‘big data’ initiatives, such as the New York Genome Center and Project MinE to enable large sequencing and gene identification efforts. The Association is also investing in gene therapy, RNA therapy and trophic factors.

Five to 10 percent of ALS cases are familial, meaning that the person inherited a mutated gene from his or her parent. It is very likely that genetics contribute, directly or indirectly, to a much larger percentage of ALS cases.

Multiple large ‘big data’ efforts to sequence the genomes of 1,000s of people are on the rise. Greater than 25 ALS genes have been identified since the discovery of SOD1 in 1993. With a boom in sequencing technology to read the DNA of a person’s genome and lower costs to carry out sequencing experiments, gene discovery has exploded. Since the Ice Bucket Challenge in 2014, four new genes have been discovered, TBK1, TUBA4A and now NEK1 and C21orf2, and an additional two genes (MOBP and SCFD1), which are strongly associated with ALS were all supported by The ALS Association.

Below information about the most commonly known ALS genes.

Mutations in this gene, discovered in 2011, are the most common genetic cause of ALS. Its name refers to the position of the gene “open reading frame” on chromosome 9. Mutations in this gene account for between 25% and 40% of all familial ALS cases (depending on the population), and also approximately 7% of sporadic ALS cases. The gene mutation appears to act in a dominant manner. This gene also causes 25% of another neurodegenerative disease, called frontotemporal dementia (FTD). Some people with this gene will develop symptoms only of ALS, some only of FTD, and some will have symptoms of both disorders. There are many theories about how C9orf72 causes disease, and is the subject of a great deal of intense research.

Mutations in Cu/Zn superoxide dismutase (SOD1) were first described in 1993, and SOD1 was the first gene associated with ALS. It accounts for about 10-20% of familial ALS and 1-2% sporadic ALS. It is inherited in a dominant manner. SOD1 is an abundant enzyme within cells that serves to keep cells safe from metabolic waste that can do damage if not rendered harmless. How SOD1 mutations cause ALS is unknown. It is clear that disease is not due to lack of function of the protein, since deleting the gene in animal models does not cause ALS. Instead, it appears to take on some new toxic function, possibly related to an increase in the tendency of mutant SOD1 molecules to aggregate and form clumps in motor neurons and astrocytes (cells that die in ALS). Learn more about SOD1.

Discovered in 2016 through a global effort by Project MinE, mutations in NEK1 are present in both sporadic and familial forms of ALS. Together, NEK1 is associated with 3% of all ALS cases. Research is currently ongoing to understand the role of NEK1 in ALS disease, how it is inherited and other important questions. Learn more about this important gene discovery.

TAR DNA binding protein 43 (TDP43) was linked to ALS in 2008. Mutations in TDP43 cause a dominant form of ALS and are responsible for about 4% of familial ALS and about 1% of sporadic ALS. The normal role of the TDP43 protein includes binding to RNA, the genetic messenger molecule. Mutations in the TDP43 gene cause the TDP43 protein to mislocalize in motor neurons, away from the nucleus where it is normally found, and into the cytoplasm (the material surrounding the nucleus), where it aggregates into clumps that can be seen under the microscope. In almost all cases of ALS (except for SOD1 cases), even though TDP43 mutations are absent, abnormally accumulated TDP43 can be detected suggesting that TDP43 may play a pivotal role in many forms of ALS.

Fused in sarcoma (FUS) was also discovered to play a role in ALS in 2008. Like TDP43, it is inherited in a dominant manner. It is responsible for about 5% of familial ALS and about 1% of sporadic ALS. It is structurally very similar to TDP43 and also is an RNA binding protein, and may play a similar normal role in the cell. FUS and TDP43 may in fact interact as part of their normal function.

Ubiquilin-2 (UBQLN2) was linked to ALS in 2011. Unlike all other known ALS genes, the ubiquilin-2 gene resides on the X chromosome, one of the chromosomes that determine sex. Men carry only one X chromosome, while women carry two. Despite this, both men and women develop ALS due to ubiquilin-2 mutations. The normal function of the protein is to help degrade damaged or defective proteins in the cell. It is likely that mutations in the gene interfere with this function, and may lead to accumulation of harmful material within the cell.

KIF5A, or kinesin family member 5A, was linked to ALS in March 2018 by an international sequencing collaboration. Mutations contributing to familial ALS appear to be inherited in an autosomal dominant fashion. People with familial KIF5A mutations display an extended survival rate of 10 years on average. KIF5A is a microtubule-based motor protein involved in transport of protein cargo in the cell. Kinesins play an important role in transport along a motor neuron axon (axonal transport), which is crucial to motor neuron health. Learn more about KIF5A here and here.

Other genetic variants of ALS affect relatively few people. Nonetheless, understanding how they cause the disease may offer large insights into the disease process, which could lead to new therapeutic targets. These genes include VCP (valosin-containing protein), ALS2 (alsin), SETX (senataxin), ANG (angiogenin), PFN1 (profilin-1), MATR3 (matrin-3), CHCHD10 (coiled-coil-helix-coiled-coil-helix domain containing 10), TUBA4A (tubulin, alpha 4A), TBK1 (TANK-binding kinase 1), NEK1, C21orf2 and OPTN (optineurin), among others. Many of the gene mutations are in proteins of similar function and can be grouped into those involved in cell axon dynamics and those involved in the clearance machinery of the cell, to name a few.